You just arrived in Italy but you don’t know what else to do for Christmas after visiting the most famous places and monuments? We have 5 activities for you to do this season that you probably didn’t know you could do this year!

Every year, the Vatican City is decorated for Christmas with gorgeous lights and decorations. The Nativity scene and the Christmas tree are usually the focal points. The custom began in 1982 at the Vatican, courtesy to Pope John Paul II, who held that these depictions were “a show of confidence in God.”

The creche is shown throughout the Advent season, which lasts four weeks before Christmas. However, the infant Jesus only appears in the manger on Christmas Eve. The scene is taken down in early January on the Feast of the Baptism of the Lord, i.e. the 12th day of Christmas.

The nativity scene that will be displayed in St. Peter’s Square in the Vatican to honor Christmas in 2022 will be from the northern Italian town of Sutrio, in the Friuli-Venezia Giulia region.

The crib is entirely composed of cedar wood sourced from a sustainable forest. It has a semi-sphere that will serve as a Grotto, displaying the Holy Family. Life-sized figures portraying Sutrio’s traditional craftsmen, such as carpenters, weavers, and crafters, surround them.

The nativity scene will be on display until the Feast of the Lord’s Baptism, which falls on January 8, 2023.

The Green Line festival, promoted by the Municipality of Florence and organized by MUS.E, will animate the city of Florence from 7 December 2022 to 8 January 2023 and will have as its central theme the four natural elements – air, water, earth, and fire -, the man-nature relationship, and the connection between heritage and good care. 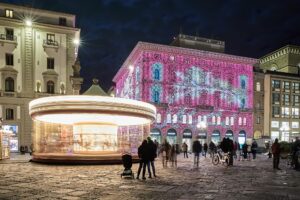 Green Line replaces F-Light, the past events that have distinguished Florence during the Christmas season in recent years with video projections, installations, and workshops dedicated to the world of light, engaging the city from the center to the suburbs.

The city’s monuments and squares, from the center to the outskirts, will be transformed into a magical and unforgettable experience for everyone. You can easily go on a round trip to Florence by train so you don’t miss the Green Line festival this year!

You can learn more about this festival clicking here.

#3 – The Christmas Market in Bolzano

Bolzano is well-known throughout the holiday season for its spectacular Christmas Market! From the end of November until the 6th of January, around eighty exhibitors display everything that creates a Christmas mood, as well as the numerous celebrations that surround it. Bolzano is known as the Italian capital during the Christmas season. 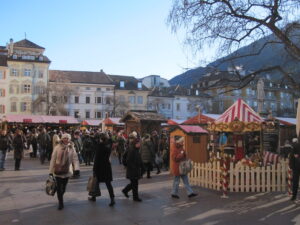 During Advent, the city is lit up in Christmas colors and music, with hundreds of lights lighting the streets of its historic core and traditional Carols playing in the background. In the weeks leading up to Christmas, the ancient city center is transformed into a spectacular citadel of illuminations and decorations.

A hundred little wooden houses sprinkled throughout the squares and alleyways sell the best of South Tyrolean handicrafts, while the Wine Road’s wine vaults welcome guests for a special toast for the adults to have a great time.

Make sure you plan to visit this amazing place during your trip with your family! We guarantee you won’t regret it!

Surprise, surprise! Milan is the best spot to spend Christmas in Italy, especially for shoppers 😉 The seasonal decorations at Piazza Duomo and Galleria are a must-see, and they’re also ideal for wrapping off your Christmas shopping. You won’t have more excuses to give presents to your friends and family if you come here!

You’ll enjoy the Christmas Markets, festivals, plays, and decorations that bring Milan to life around Christmas, and the city’s ambiance becomes something magical. With this charm comes crowds, so plan your trip carefully and dress warmly, as temperatures in the city plummet in December.

We recommend you some of the best places to shop in Milan during Christmas:

Even the non-shoppers will appreciate the window displays, midnight mass at the Duomo, the massive Christmas tree there, and the lights at Galleria Vittorio Emanuele II and Castello Sforzesco.

Just be aware of not forgetting to bring back all the shopping bags back to your room though!

#5 – The Living Nativities in Sicily

A significant and treasured symbol of Sicily during Christmas is the living nativity scene. Many Sicilian villages perched on hills and mountains and surrounded by valleys are ideal locations for performing the living nativity scene: mazes of narrow cobbled streets provide the ideal setting and atmosphere to recreate ancient Bethlehem and the time of Jesus’ birth, while the inhabitants enjoy dressing up and offering local food and wine to visitors, with the sound of the traditional bagpipe in the background.

Every year, a large number of people enjoy the breathtaking scenes in some villages where faith and nature coexist harmoniously. Here we recommend some towns and cities where you can see the Living Nativity scenes:

• Castanea (Messina): is located on the hills of Messina. Every Christmas, Castanea transforms into the setting for one of the most popular and magnificent living nativity scenes in Sicily.

• Gangi (Palermo): in 2014, Gangi was named the most beautiful Italian village.

• Ispica: located in South-Eastern Sicily, following an itinerary from the historical center to the famous location of “Cava d’Ispica,” a very spectacular ancient site where the nativity scene is placed.

In Ancient Sicily communities, Christmas means not just real nativity scenes, but also other major traditional representations known as Pastorali, which are religious dramas popular in Sicily in the XVII and XVIII centuries. They are now rather prevalent in the Sicilian interior towns of Agrigento and Caltanissetta. The term pastorali refers to the figure of the shepherds, who, according to Christian tradition, were the first to see newborn Jesus because of their simplicity and humility.

We hope these places catch  your attention and that we picked your curiosity to see them by yourself this year. Please send us your pictures when you visit and let us know your experience by tagging us with our socials or via email at [email protected]

Also, if you want to see more events coming up in Rome to know more about the traditions or expats like you, just click here!