The BEST expat stories of Italy: Our prime picks of memoirs for the Italophile

Have you ever parted company with everything you know in exchange for a life in Italy?

If so we ask, what was your motivation?  Did you desire to road trip through the rolling hills of the Tuscan wine country?  Was it to witness the remnants of ancient Rome? To marvel at the Renaissance art of Florence?  Or was it to bask in the sun of the Calabrian beaches? Did you want to enjoy the world famous pizza of Naples?  Or be swept off your feet by an Italian lover? Perhaps it was all the aforementioned and more...

We all seek to find the time of our lives in a country that has so much to offer.  What happens if you find it less than you had fantasized? Maybe you’ve experienced a moment of uncertainty on what to expect, how you’d be received, or whether or not you were “doing things right”?  All of these questions are explored in the selected stories that follow.

We love stories like we love bella Italia, so we chose to compile a list of our favorite memoirs written by authors who have walked the same common ground.  They’ve scribed their experiences of being a foreigner in Italy in profoundly intimate detail for us to consume. These are some of the greatest memoirs of Italy.  They offer us insight and education on the Italian culture. They romanticize and at times, even challenge the illusion of “La Dolce Vita” and to fellow expats who have lived here, their stories can be highly relatable.

And if you and your story live in a place apart from Italy, we ask, where is the guilt in living vicariously?  Without further ado, here is our selection of favorite titles we like to think of as “chicken soup” for the Italophile: 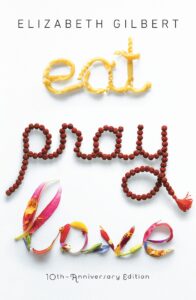 You may have heard of this tale from the 2010 major motion picture featuring Julia Roberts.  The book, as in many cases, is remarkably superior to its screen adaptation.

Author Elizabeth Gilbert jets you around the globe to 3 deliberate destinations, on a gallant endeavor to rejuvenate her love of life.  She sweeps her NY existence under the rug to pass her first few months in Rome, enthusiastic to study the Italian language. There she makes close connections with new friends and together they admirably celebrate the Italian way of living.  She scribes charismatically of her overindulgence in the local gastronomy. As her jean size increases, it becomes apparent that her reason for being in Italy has evolved to ”eat”. Later she goes on to experience India, where she joins an ashram for 3 months of “pray”, her spiritual development.  The last leg of her tour is in Indonesia, where she unwittingly discovers something she didn’t expect life to ever gift her again, “love”. Your heart will swell over the sincerity in Gilbert’s expression of naked emotions. At minimum, you’ll get a few laughs, seeing Rome through her experience, sharing her wanderlust for travel and her love of Italian cuisine! 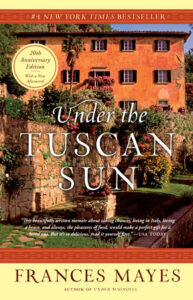 Under the Tuscan Sun Francis Mayes

This triumphant memoir experienced mainstream success, remaining on the NYTimes best-seller list for nearly three years and was later adapted into a major motion picture in 2003.  American author Francis Mayes is touring the countryside of Tuscany, in search of her life’s next true-calling: Bramasole, that is, a crumbling, yet charming old villa for sale. She becomes magnetized to the property and gambles her life savings to attain it, transfixed by the potential she sees.  With limited time and too much on the line to dwell in buyer’s remorse, Mayes gets to work. She recounts the daily grievances and rewards that come along with home restoration, paired with the incredulity of a new life in a foreign country. Expression of sensations is what Mayes does best in this enchanting narrative.  Her articulation of sheer joy seemingly creates a warmth within its readers, one might fantasize as the radiance of the Tuscan sun. 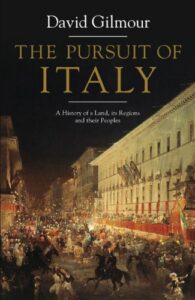 The Pursuit of Italy David Gilmour

Gilmour, an English journalist and decades-long serial traveler of Italy, felt compelled to challenge the question of Garibaldi’s Risorgimento.  Had Italy been better off divided into 3, maybe 4 nation states? In his pursuit of an answer, he stays in all 20 of Italy’s regions to gain perspective on their heterogeneity.

He traces the divisions and regionalism of Italy back to the roots of its origin, that is, the country’s origin, feeding you mouthfuls of facts and morsels of analysis.  His recount of Italian evolution is carefully researched, organized and laid out before you to greedily ingest. 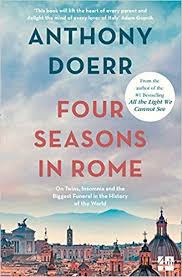 Four Seasons in Rome: Twins, Insomnia, and the Biggest Funeral in the History of the World Anthony Doerr

Yes! Doerr wrote his Pulitzer Prize winning novel All the light we cannot see from his apartment in Monteverde, during a year long fellowship at the American Academy.  His memoir is framed through the eyes of a recent father of twins, grappling with his first experience living abroad, juggling his university research of Pliney the Eldest and producing short story assignments, all stymied by inexplicable insomnia.

The story doesn’t always center-focus on him.  Doerr’s meticulous Roman history research digs centuries underground the streets he walks over.  He often pauses to consider the magnitude of his surroundings. He leads you through places often overlooked by tourists and locals, where the naked eye can no longer identify what once existed.  He ponders the significance of each location through a barrage of facts, analysis and his overall feeling. Evocative and illuminating, his literary prowess is once again very much on display to admire in this venerated memoir. 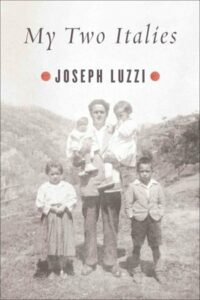 In 1818 English romantic poet Percy Bysshe Shelley and his wife Mary Shelley, author of Frankenstein, were two of the most famous expatriates living in Italy when he wrote in a letter:

"There are two Italies ... The one is the most sublime and lovely contemplation that can be conceived by the imagination of man; the other the most degraded disgusting & odious."

It was this quote that incited Italian-American author and professor Joseph Luzzi to envisage his own two Italies: the Northern Italy which we devour in our classical studies of Dante, Michaelangelo and DaVinci and the South, in particular the winding countryside of Calabria, where his peasant parents fled a post-WWII impoverished economy to immigrate to the US in hopes of greater prosperity.

Luzzi focuses the lens on being brought up by two southern Italians in the suburbs of Rhode Island in the 1970s, where daily life is executed, like the farm animals raised for food, in true old-world Calabrian style.  Like most first generation Italian immigrants, his parents never acclimated to the American way, which leaves him with the bittersweet acknowledgement that even decades later as his father is passing, his parents were still but two foreigners displaced from their treasured homeland.  This book may strike a chord with fellow (southern) Italian- American readers, tackling issues such as the desire and tendency to admire the rich Renaissance history of the North, the shame and embarrassment of originating from a destitute region often overlooked, and even feeling a sense of loss, where one was not afforded the experience of growing up in Italy.  Luzzi interweaves classic Italian poems, insight of the Italian identity and two decades of modern political history into his memories in a reconciliation of love and tragedy. 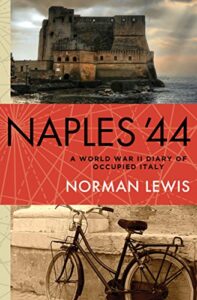 This historical memoir of a British officer stationed in Naples in 1944 was recently adapted into a documentary by director and screenwriter Francesco Patierno.

Norman Lewis, an esteemed travel writer, was a British officer during WWII, stationed in the Campania region.  He writes about his year spent in Naples, where he was called on to investigate and sanction or reject the validity of marriage license applications for British soldiers and Italian women.  His account of a poverty-stricken, war-time Naples is quite comprehensive, as his job necessitates frequent contact with the locals. He comes across all the ”usual suspects”, unknowingly describing the timeless archetypes of Napolitan society, who one may know or live by or be related to, in modern-day Naples.

He experiences mixed sentiment towards the Napolitan people.  Throughout his stay, his reactions circle 360, from abhorrence and compassion, to contempt and even amusement.  He is disgusted by the hustling and thievery. He is dumbfounded by how effectively and efficiently it is carried out.  He is forgiving, as he witnesses a city of bodies wither away from hunger. His final thoughts as he departs from Naples make for a touching twist.

Norman Lewis went on to publish two more travel books about Italy, In Sicily and The History of the Mafia, which are also great, informative reads. 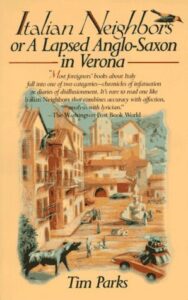 Parks is an Englishman in Verona.  In his first Italian memoir, he records the absurdity and hilarity of communications with his very own neighbors, both through a language and cultural barrier.  His second installment, An Italian Education,  highlights the experience of living in Italy as a family unit with his young son.  His heavily descriptive views often glorify and even romanticize the Italian way of life.  He deserves an honorable mention in the Italophile genre. 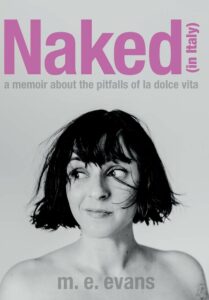 This is our wildcard pick, as it’s more unconventional.   Appropriately titled, author M.E. Evans bares it in this cheeky tell-all that will captivate you from cover to cover.

Evans originally gained notoriety from her popular blog site, Surviving Italy, where she chronicled her misadventures of living and studying in Florence with more honesty than we sometimes afford ourselves.  If you are a fan of her blog posts, you will appreciate her debut novel even further, which features finer points on new stories.

As she is mourning from the sudden loss of her brother, American university student Misty Evans decides she needs a change of scenery.  In a fit of impracticality, she switches her major to art and transfers to Florence, in search of her own revival. Filled with romanticism and dreams of grandeur, Evans tells you what really happens when you mix grief, culture shock, artistic insecurity and limoncello in the “Birthplace of the Renaissance”.  Then a southern Italian man enters the scene, who is most-assuredly followed by a southern Italian mother. Things couldn’t get more interesting for Misty, who accounts for this with clever wit and some vulgarity in a book that will have you laughing page by page. 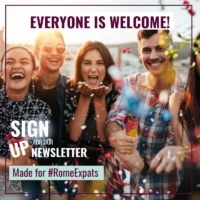