5 Hidden Streets to Walk in Rome 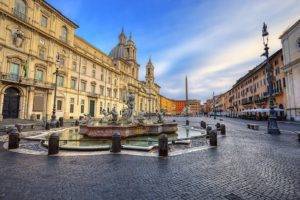 For millennia, Rome's streets and piazzas have been walked and then some—the focal point of the ancient empire's transit network, there's a reason we have the saying, "all roads lead to Rome." As the third most visited city in the EU (after Paris and London), it can seem there are few areas left to be discovered, but if you're willing to look up from the map and stretch your comfort zone, a lesser-known, far more modern version of the city appears. From former Olympic athlete housing to a neighborhood devoted to street art, these are five blocks you won't want to miss.

A few tram stops north of Piazza del Popolo, at the corner of Via del Vignola and Via Flaminia, is the street Via Celentano—though its neighbors never call it that. Instead, it's known as Piccola Londra (Little London), a turn-of-the-century, private road that gives off a Notting Hill-meets-Mary-Poppins vibe. Stop by this stretch to see the colorful, immaculate homes and to marvel at how this haven ever came about.

In the city's northeast Trieste neighborhood, there is an early-1900s enclave called the Quartiere Coppedè of whimsical architecture by Florentine architect Gino Coppedè. Marble and metal ornaments like spiders, sea horses, and lizards decorate rustic Craftsman-style houses and buildings, which are painted with modern frescoes and beautiful patterns. It looks like a page from a fairy tale.

The EUR neighborhood, a fifteen-minute drive southwest of the city center, may be well-known but it hardly gets the foot and photo traffic it deserves. Originally designed for the 1942 World Exposition by architect Marcello Piacentini in the late 1930s and finished in the early 1950s, its is a snapshot of a would-have-been Rome, with monumental travertine buildings, palaces, and piazzas of Rationalist architecture. Be on the lookout for the Square Colosseum, a stark white minimalist nod to its 2,000-year-old counterpart.

Probably one of the best places to get lost, if you can find it. The outer limits Quadraroneighborhood (in Rome's southeast periphery), is a micro-state all about street art. Artists including Gary Baseman,Alice Pasquini, Jim Avignon and Diavu have covered its exterior walls to create an open-air museum, and more continue to add to it.

Erica Firpo is based in Rome and writes about Italy for Travel & Leisure. Follower her on TwitterandInstagram

Day trip from the past! Can you guess which city i

👇Here is your excuse for getting out the house

Honestly, we gave up on the 4th line 😂 what abo

Thank you for coming out last Tuesday! We invite y

Weather was not great but the company was awesome!

TUESDAY, September 29 We hope to see you for our T

Some menu preview for our next aperitivo on Tuesda

On Tuesday Sept 22nd in testaccio at @rec23_restau

😉 Thank you for coming out last night!! We had

🔴English speaking Hair dresser in Rome that is

🔴TOMORROW - Gelato or other delicious sweets an

Reminder we have lessons for English or Italian fr