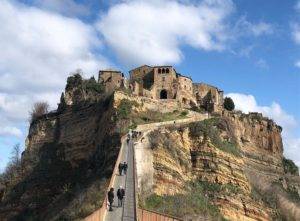 Civita di Bagnoregio, is a beautiful medieval town that was on my to-do list for a long time, so when I saw the event  I signed up. It’s not easy to get there by public transport and an organized day trip would be your easiest option.

I booked with Expats living in Rome because I was new in Rome and wanted to meet others. I made some good connections and friends.

The ride to Civita di Bagnoregio should take around 2 hours, including a short stop for the ones who smoke or would like to get breakfast and/or a coffee. The most of the ride we drove on the highway until we came close and the scenery began to change into green hills with sheeps and a farm every now and then.

The city of Civita is known for its striking position on top of a plateau of crumbling volcanic tuff and has a view of the valley and the Tiber River. Unfortunately, the city is at further at risk, for example, the edges of the city collapse with some regularity as a result of erosion. Many buildings have fallen into the abyss in the past. The city is also much admired for its old-year-old architecture. There are about 7 people in winter and 100 in summer. Many famous actors and other celebrities have a cottage in Civita.

I looked around and saw people on the street everywhere which were bus loads of tourists.  It was February and a bit chilly but doable.  We were lucky that it was sunny it definitely completed the pictures. 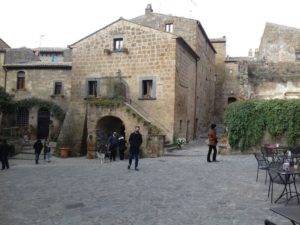 We parked in Bagnoregio and from there you can walk to Civita, ti’s about a 15 minutes walk or you can take a small shuttle bus that will take you there in 3 minutes round trip shuttle costs €1 that you buy on the bus directly.  When we arrived to the top entrance can see Civita. This is when the tour started and you can listen and snap some photos of the beauty in front of you! 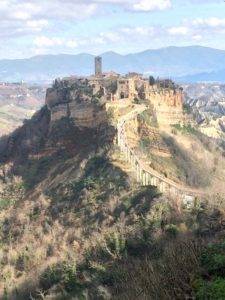 Connected by only 1 road and a bridge to Civita the dying town. A city on top of a hill in a green valley. Fact is that in the past there were more than 5 ways to reach the city. Unfortunately Civita is crumbling apart because of past earthquakes, climate change, etc.  Also the soil underneath the city consists of soft material.

Civita was founded more than 2500 years ago by Etruscans. Civita was the birthplace of Saint Bonaventure, who died in 1274. The location of his youth house has long ago fallen from the edge of the cliff. By the 16th century Civita began to decline in size and the city was overshadowed by the former suburb of Bagnoregio. At the end of the 17th century, the bishop and the municipal authorities had to move to Bagnoregio because of a major earthquake that accelerated the deterioration of the old city. At that time the area was part of the papal states. In the 19th century the location of Civita changed into an island and the rate of erosion was accelerated when the layer of clay under the stone was reached in the area where today’s bridge is located. Bagnoregio continues as a small but prosperous city, while Civita became known in Italy as La città che muore (The Dying City). Recently, this city is very popular with tourists.

When walking up the path to the city you have an amazing view over the valley and the surroundings. It’s hard to imagine that the valley first didn’t exist. The climb is not that hard but for those that can’t walk up hills might struggle. You can go at your own pace of course.  When you finally arrive you can really see how big the valley is and how much damage there is already been made. A few years ago there was a church before the walls that collapsed.

If you haven’t been to Bagnoregio yet it’s a must see!  #YITGDayTripfromRome 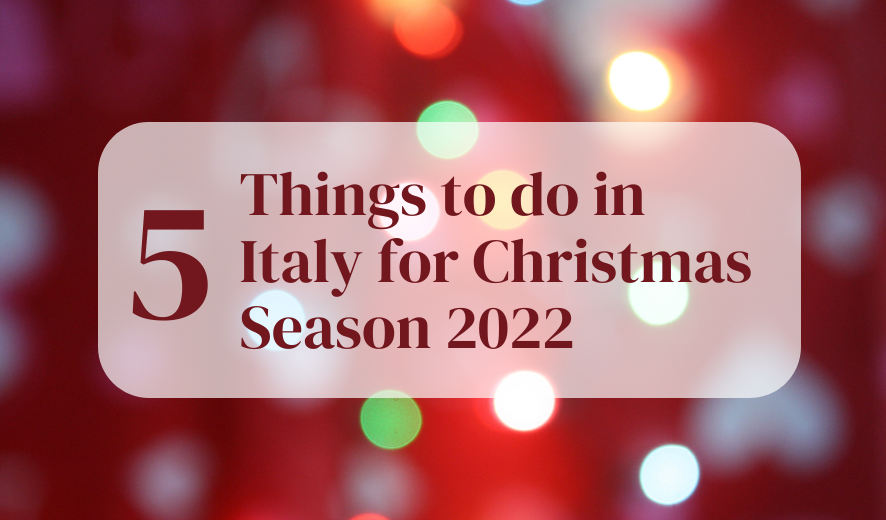 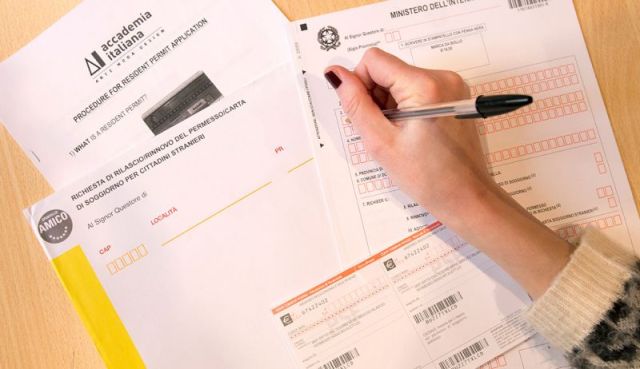 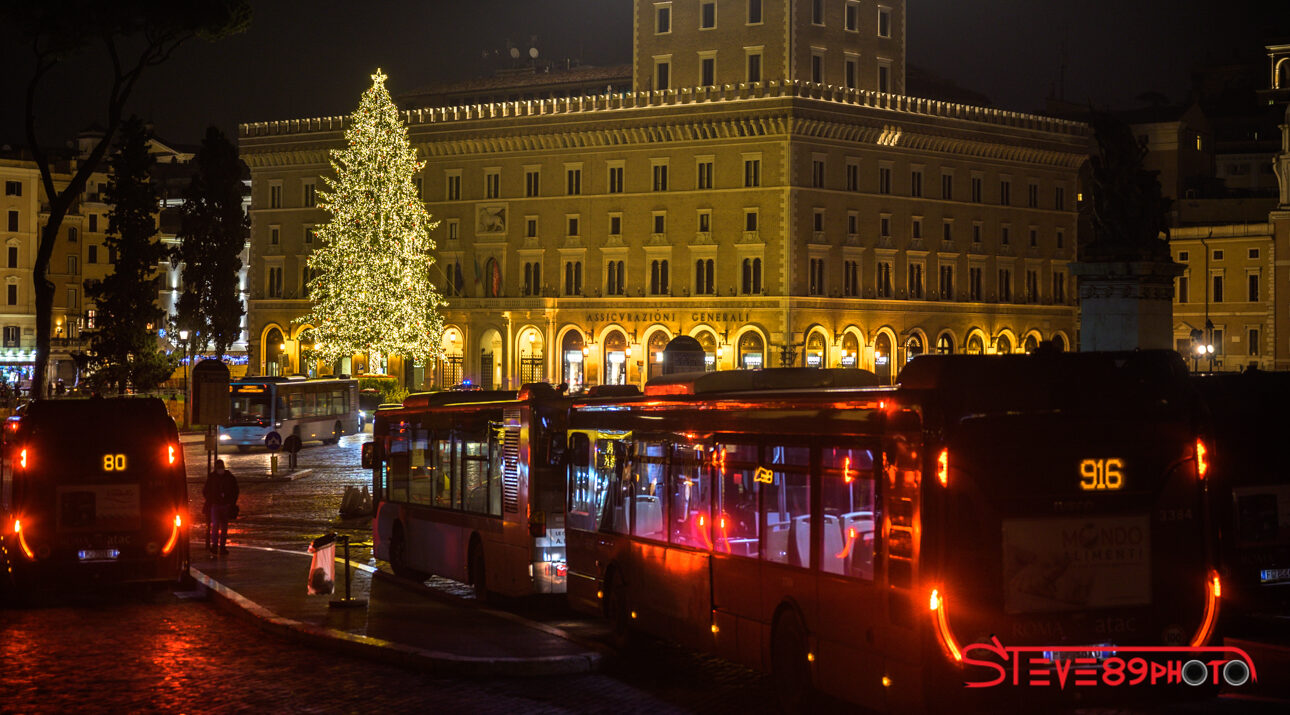 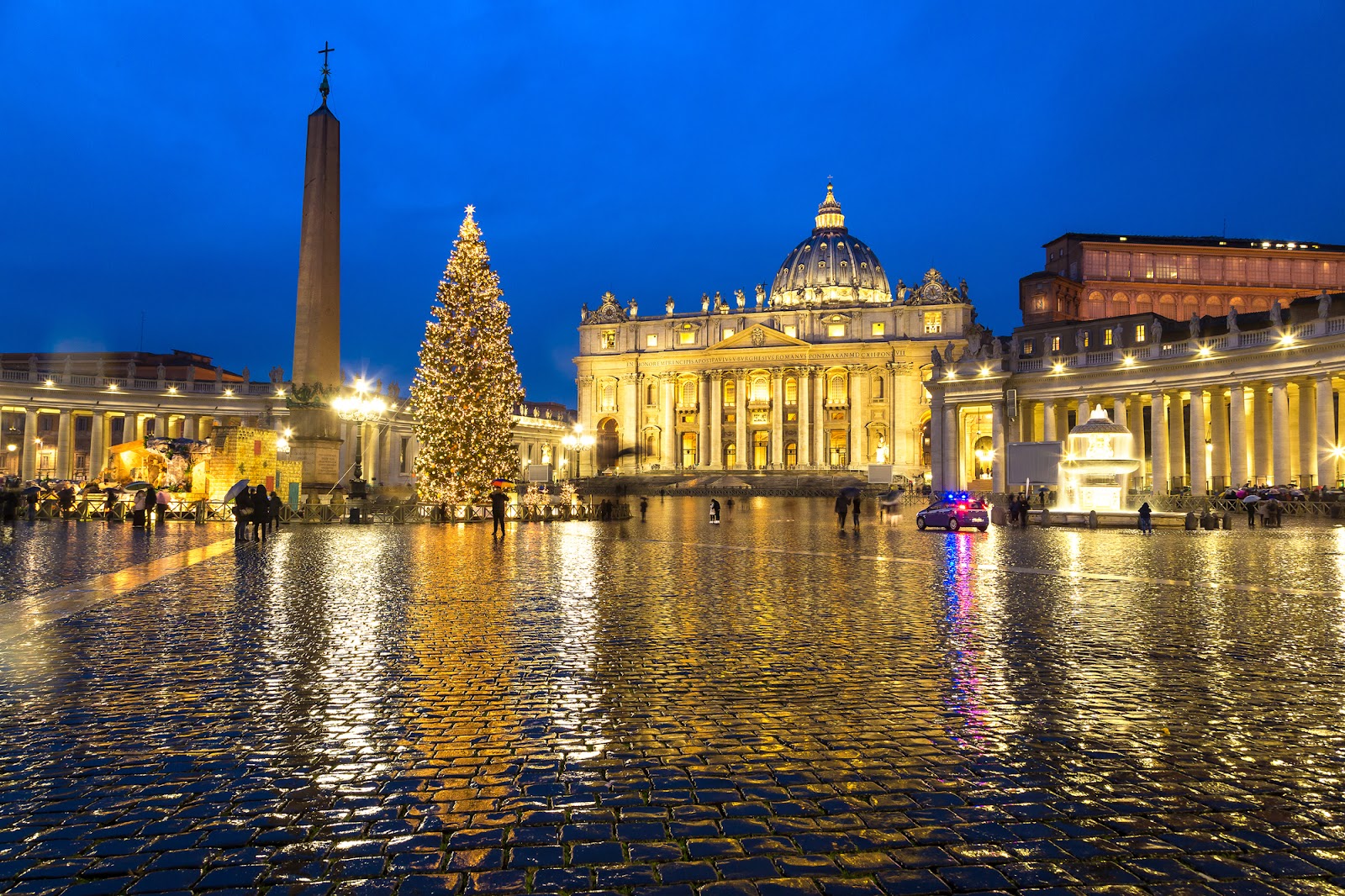