Many foreigners in Italy have to deal with the tax aspects arising and in this article we explain when to file the return in Italy, and which income must be taxed in Italy for foreigners.

In this situation that a person has moved to Italy for work reasons only, therefore without moving their tax residence to Italy. This generally happens when a person decides to stay in Italy for a limited period of time (for example a few months).

In this case the employer, that it is an employee, will have to apply tax withholdings in the pay slip, which are nothing more than an advance on taxes, which will then be adjusted through the tax return which must be presented the following year.

In some cases, the withholdings that are applied by the employer represent undue taxes, due to the agreements against double taxation stipulated between Italy, and the State where the worker resides. Therefore, the presentation of the tax return represents the instrument for obtaining the reimbursement of these taxes not due, and which have been withheld by the employer.

It should be remembered that the employer issues the Single Certification (CU) at the end of the contract, or by March 31 of the following year. The Single Certification has no income tax return value. It is a document that certifies the income that has been paid to the worker. It should be known that the unique certifications are also communicated by the employer to the Revenue Agency which in this way will be able to verify who has received income in Italy and has not submitted the tax return. Therefore, it is still necessary to submit the tax return, as as mentioned the single certification is a requirement for the employer, and does not free the taxpayer from submitting his own tax return.

b) Foreigners who have transferred their tax residence to Italy

In this case, having transferred the tax residence to Italy, all income must be declared in Italy.  Therefore, if after having transferred your tax residence to Italy, you continue to have income abroad, for example in your country of origin, these must be declared in Italy following Italian regulations. Incomes earned abroad are generally declared by filling in the RW box of the tax return.

Examples of income and activities that must be reported in part RW:

– financial contracts entered into with non-resident counterparties, such as loans, swaps, repurchase agreements and securities lending;

– derivative contracts and other financial relationships stipulated outside the state territory;

– forms of complementary pension organized or managed by companies and entities governed by foreign law, excluding those required by law;

– life insurance and capitalization policies provided that the foreign company has not opted for the application of the tax replacement and stamp duty and the task of regulating all related flows has not been assigned to an Italian financial intermediary with the investment, with the disinvestment and the payment of the related proceeds;

– Italian financial assets in any case held abroad, for example through foreign trustees or foreign intermediaries, both in safety deposit boxes;

– assets and investments held abroad through entities located in countries other than collaborative countries as well as in entities Italian or foreign legal entities, other than companies, if the taxpayer is the “beneficial owner”;

Looking for more help? Schedule a  FREE 30 minute call with our finical advisor at  legal@expatslivinginrome.com our team can help you understand and guide you with this. 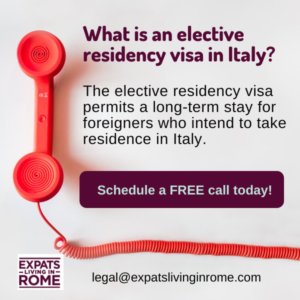 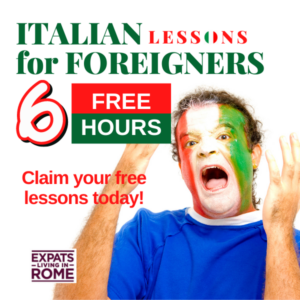